The first steps towards the successful launch of our project Hope Springs Eternal: The Deepdene Trail began in 2011 with Alexander Bagnall, Mole Valley District Council’s Tree and Countryside Officer. But the story wouldn’t have the happy ending it does without the support of the Friends of Deepdene – a group of inspired locals interested in conservation and the history of the Deepdene.

Alex’s interest sparked in 2008 with the V&A exhibition about Thomas Hope, owner of the Deepdene Estate in the early 19th century. As part of Alex’s role at the time he was responsible for the Chart Park area. A physical remnant of Thomas Hope’s time was still just visible in the Park, the Hope Mausoleum.

Alex contacted the Mausoleum and Monuments Trust who helped start a campaign to save the Hope Mausoleum. As a result in 2009 the Mausoleum was partially excavated and a year later survey work led to the first look inside in over 50 years.

The Friends of Deepdene

Around this time Bryan, Surrey Wildlife Trust Warden for the Deepdene Terrace became Warden of Chart Park. Soon other locals became interested in supporting the conservation of the site and by the end of 2011 a group of volunteers formed – the Friends of Deepdene, dedicated to the conservation of the Deepdene Estate with interests in local wildlife and local history.

Alex worked with The Friends’ volunteers tirelessly over the next year to highlight areas of interest around the Deepdene in order to find out what could be salvaged of the once great Estate.

In 2012 they cleared the Coach Road in Betchworth Park, opened up views to the Terrace from Glory Wood and restored the beautiful steps up to the Terrace.

They also uncovered the remaining shape of the Deepdene Gardens from the undergrowth with the support of owner’s Kuoni Travel, lots of hard work and a few good fires! 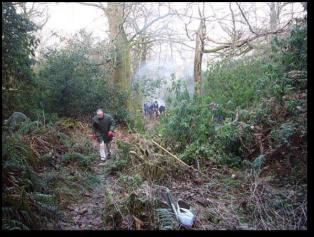 The Deepdene Gardens before, 2012 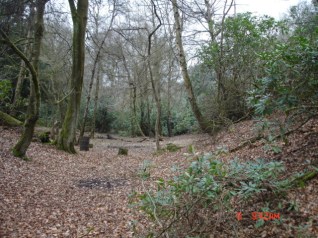 The Deepdene Gardens after, 2012

In early 2013, the Friends put their backs to the shovels with work at Betchworth Castle and at the Hope Mausoleum. Other works over the year included improvements to the Deepdene Terrace and a great effort to clear Betchworth Park of Himalayan Basalm, an invasive and destructive plant. 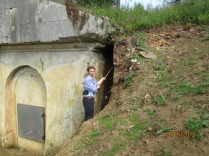 Alex joins the volutneers digging at the Mausoleum, 2013

Volutneers dig to reveal the walls of the Mausoleum, 2013

This hard work revealing what the Deepdene Estate still had to offer allowed Alex to put in a successful bid to the Heritage Lottery in 2013. They awarded funding to the Mole Valley District Council to conduct surveys, consultations and other key activities to further develop plans on how to rescue the Deepdene Estate.

Alex oversaw the development work seeking supporters, working out what needed to be repaired and conserved and developing the community engagement plan. The Friends continued to maintain the Estate and find ways to return the land to its historic roots.

The Friends also gained two key pieces of equipment that year, a car generously donated for transporting tools – nicknamed ‘Jude’ – and a shipping container that they transformed into a storage area – the Bothy.

2014 saw further development of the proposed project by Mole Valley District Council and Alex alongside the support on site by the Friends of Deepdene. A range of partners and stakeholders came forward to ensure the project’s success (see details on our partners).

Earlier in 2015 the project succeeded with the award of a £1m grant from the Heritage Lottery Fund. The funds will be used to repair key architectural and landscape features to relink the fragmented parcels of land of the historic Deepdene Estate. We will also engage the local community and wider public in rediscovering this Great Lost Landscape. The new Deepdene Trail which will open to the public in September 2016.

A big THANK YOU to all the volunteers who supported Alex and the Council and to the Heritage Lottery Fund for supporting us in making this project possible. On-going support from our will ensure the Deepdene Estate can be enjoyed by all its visitors for many years to come.

Find out more about the Friends of Deepdene  at: